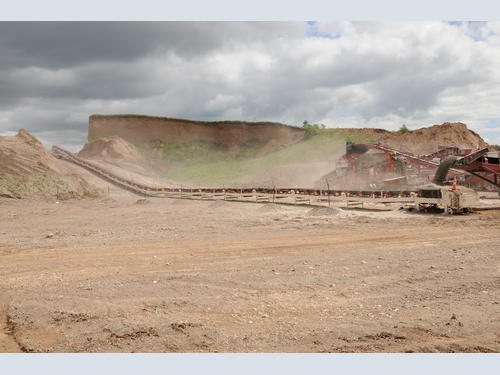 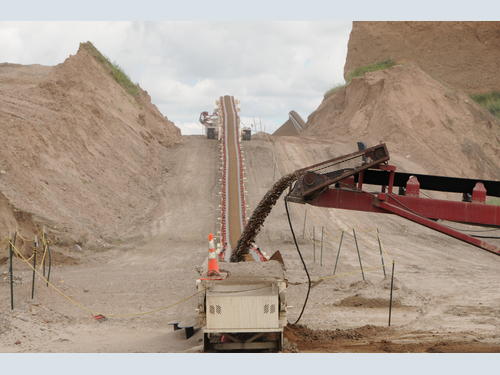 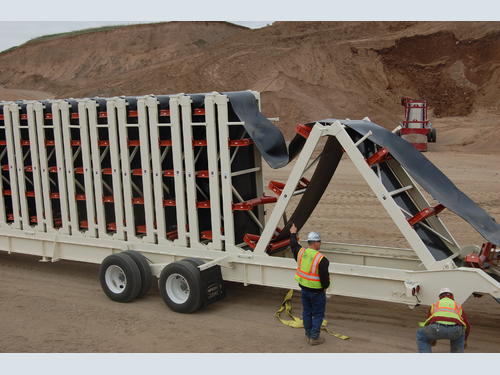 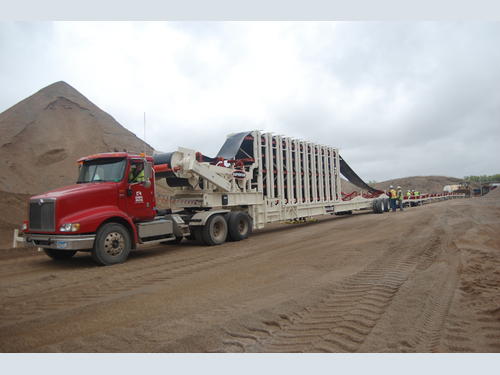 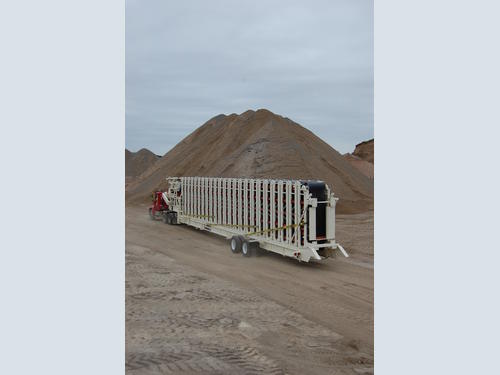 Portability, portability, portability – that’s the mantra for Knife River Corporation – particularly its North Central Division, which has nearly 30 aggregate, ready mix and retail locations in Northern Minnesota, U.S. region alone. “We go where the projects are, moving up to 60 times per year, and producing material at either owned or leased sites. With plentiful natural gravel resources throughout our region, portability is everything to us,” says Craig Raske, aggregate equipment manager for the North Central Division. Knife River Corp. is the sixth largest U.S. sand & gravel producer, with operations in 17 states.

As a more-than-25-year industry veteran, Raske knows well the juggling act of configuring one portable spread after another, determining just which plant, and what components, will best serve the requirements at each location.

Recently, Raske faced a material transport challenge at a Minnesota-based location – that of finding a short-term, yet cost-effective way to move material from the crushing plant to a wash plant – a distance that had steadily grown to 305-meters as the pit neared depletion.  After the site was sold to the local airport, Raske and his team had only two months to pull as much material from the deposit before a mid-summer deadline to vacate. Initially, his material handling options included using haul trucks, or assembling more than a dozen shorter transfer conveyors. Neither strategy fit the bill. Haul trucks were far too costly and labor intensive, and stringing together a number of transfer conveyors meant taking units from locations where they were better utilized.

Fortunately for Raske, a timely solution came in the availability and rental of a portable overland conveying system – the Trailblazer® Portable Groundline Conveyor – designed and manufactured by Superior Industries. A highly unique innovation, the new material handling system includes 152-meters of fully-belted and assembled groundline conveyor in a mobile, one-load, towable package (there are shorter models available too).

Versus a traditional, stationary groundline conveyor which would require days or even weeks for setup and teardown, the Trailblazer Conveyor system allows rapid deployment from the road to working status in just about an hour. With a gravity-style take-up built into the trailer structure, the Trailblazer Conveyor simply folds in or out in an accordion fashion from its chassis with a minimal crew required to position the supports. “We had never really seen anything like it before,” says Raske. “Once we understood how the system works, how to coordinate the crew and where all the components need to line up, we could see how easy it would be to set it up the next time,” he says.

Jarrod Felton, Superior Industries president, was onsite at Knife River when the Trailblazer Conveyor arrived for setup. “Of our five-man setup crew, we had one worker communicating with the truck operator, another worker to handle the transport straps and pull-pins for each conveyor section, and two workers to position the supports,” says Felton.

The Trailblazer Portable Groundline is also designed to accommodate variations in grade. At Knife River, the system is set to convey material up a 12-degree incline and over an embankment, which could be accomplished via its standard drive. “Variations in grade dictate the size of the drive required, and the hinges on the channel sections can handle significant changes in grade as long as the drive is sized accordingly,” says Felton.

Knife River placed an existing transfer conveyor to feed material from the crusher to the 152-foot Trailblazer Portable Groundline system. From there, material is conveyed to Superior Industries Slide-Pac Conveyors (which were also part of the total rental package) before being fed to an existing stacker which stockpiles at the wash plant.

The Slide-Pac Conveyor is a three-unit system providing up to 75-meters of conveyors in one load. “We were new to the Slide-Pac conveyors as well and it is their safety aspect that really impressed us,” says Raske. “We’ve had stackable-type conveyors, but they need to be lifted off the chassis either with a forklift or a loader. The Slide-Pac Conveyor is designed with a roll-style slide-off system for safety and ease in unloading. Set up takes just minutes,” he says.

Raske says that the portable groundline system is also designed for safe operation. The transport straps and pull-pins ensure that each conveyor section comes off the chassis, in order, one at a time, as it is guided carefully onto the supports.  Additionally, the system features a modular take-up design with bolt-together guard rails that pin into place.

As to the entire material handling setup, Raske says it was really the best solution. “We will definitely rent a Trailblazer Conveyor again as the need arises. The crew really likes it. With the portable system, they have one conveyor to watch – one feed point and one discharge point. We eliminated the multiple transfer points from more than a dozen conveyors – each transfer point being a potential cleanup point and a definite greasing point. That saved us maintenance time. We’re also saving on energy costs by having one conveyor drive versus up to 14 drives to power. And importantly, we eliminated the operating costs of haul trucks. It’s all about cutting operating costs – for equipment, energy, maintenance and labor,” he says.