Changing of the guard – progressive times at Sandvik UK/Ireland. 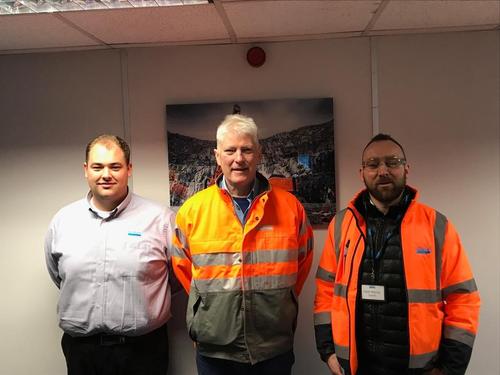 Solid business foundations are formed around good people, and as we look back at a nostalgic era stretching back 34 years, we also progress forwards into an exciting and freshly energised new generation.

Mark Haywood, Sales Manager for Surface Drills & Rock-Tools and Tunnelling, retires 31st March 2019 having joined Anglo Scandia on the 5th February 1985 and Sandvik in 1989, when Sandvik acquired the company.   “34 years of drilling holes!” says Mark – he adds “It has been a privilege to work in the industry and on some of the most interesting and challenging projects in the UK & Ireland, from the Channel Tunnel to Crossrail, Cornish Tin Mines to Irish lead / zinc mines, the road tunnels in Northern Wales, to the Glendoe Hydro Recovery Project in Scotland.  The customers have been just as interesting and varied including many Quarries and Drilling and Blasting Contractors! Great memories”

Mark’s successor is no stranger to Sandvik, with over 11 years’ service, mainly within crushing and screening, Chris Murray takes the baton from Mark from the 1st April 2019, though he has been working very closely with Mark over the past few months as part of his succession training and development into the role.

Chris is a lively and tenacious character who is bursting with energy and enthusiasm and as he embarks upon the fresh challenges the new role will bring, the deeply engrained Sandvik core values of customer focus, fair play and a passion to win will serve him very well.

Amongst these progressive times, we are also pleased to announce a newly appointed Parts and Services Manager, Oliver Calland.

With a customer focussed and engineering-based background, having served a Mining Service Engineer apprentice with Sandvik, Oliver has gained over 7 years’ experience within the company, and is following a naturally progressive career path, having held the position of Customer Service Centre Lead, to his new role as Parts and Services Manager, where he will be supporting Surface Drill customers as part of his remit.

We wish Mark all the best for a long & happy retirement, and the new guard of Chris and Oliver good luck and they of course will receive the full support from the UK/Ireland team to help them to succeed in their new roles.