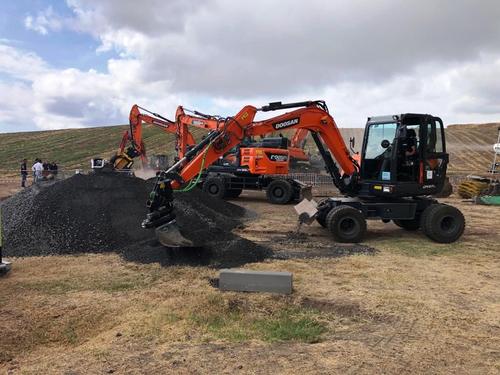 Doosan Authorised Dealer, DMP, the leader in the construction and material handling market on Réunion Island, has held a very successful Doosan Open Day event, attended by more than 100 customer and partner guests. Held at the Domaine des Palmiers site in the west of the island, the DMP Open Day event was conducted in strict compliance with safety regulations and health protocols.

Réunion Island is an overseas department and region of the French Republic and an Indian Ocean island in East Africa, east of Madagascar and 175 km southwest of Mauritius. As of January 2020, it had a population of 859,959.

Pierre Lemerle, Sales Director Construction – Heavy at DMP, explained: “Despite the effects of the pandemic that has meant most of this year’s events have been cancelled, we are happy to have hosted this successful two-day meeting, where we entertained our clients/partners on Réunion Island and provided a comprehensive demonstration of Doosan machines.

“Our aftersales service was also on show, providing our know-how in combining the Doosan machines with a range of attachments. We would like to thank our partners, in particular Jacques Painigra from Interinvest and all at Doosan for their support at the event. The Open Day resulted in sales and generated many queries and leads from the participants and we hope to repeat the event in the coming months.”

At the Open Day, Doosan DX57W-5 5 tonne and DX165W-5 16 tonne wheeled excavators equipped with quick couplers and Steelwrist tiltrotators were demonstrated using a range of attachments including buckets, a vibratory plate and a sweeper.

The DMP group specialises in the distribution, maintenance and rental of handling, construction and agricultural equipment. It is a family business founded on Réunion Island by Jacques Potier in 1972. Today, DMP has three offices located around the island, in Saint-Denis, Le Port and Saint-Pierre. The group is also present on three other islands in the Indian Ocean with its LCM agencies in Mauritius, MIM in Mayotte and Madagascar. The company has more than 200 employees.

As the sector leader on Réunion Island, DMP markets several major brands, including Doosan and Bobcat. DMP has been a Bobcat dealer for over 40 years, making it the longest standing Bobcat dealer in France and in the French overseas departments and territories. An impressive workshop and a fleet of more than 30 service vehicles provide support for more than 3000 machines operating on the island.