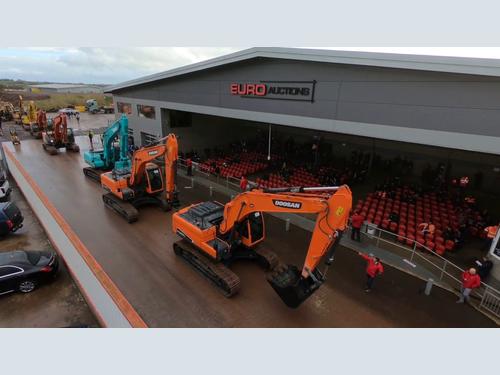 Euro Auctions, the record-breaking international auctioneers of industrial plant, construction and agricultural machinery, again saw immense customer interest and demand for its two day UNRESERVED used equipment auction at its Dromore site in Northern Ireland which took place at the end of April.

“Our auction site in Dromore continues to draw real crowds, with bidders from over 40 countries registering for the recent end of April sale,” stated Jonnie Keys, Euro Auctions’ Operations Manager. “Approaching 400 interested buyers registered interest in the sale, over 50 of whom were first time bidders, and all were looking to secure one or more of over 1200 quality used and some new equipment lots. These lots had been consigned to this auction by approaching 200 vendors; and more than one in ten of them were also using our sales services for the first time. All our auctions around the globe are unreserved and extremely popular with buyers who can always be confident that they will get quality, dependable equipment and that if theirs is the highest bid, it’s theirs.”

Significant interest in the late April auction in Dromore came from the UK and Ireland which together accounted for almost £3.5m towards the hammer total; with other significant shipments also going to Belgium, the Netherlands and the USA. Following on from the top five were buyers from Spain, Canada, Poland, Australia and Romania, all placing the winning bids on further key pieces of equipment.

“We regularly ship consignments across Europe from the Dromore auction and often to the other side of the world where it is put back into service by the successful buyers. Euro Auctions provides the complete service, from initially liaising with consignors to get the equipment to the sales site, to helping prepare it for sale and ensuring that the machines are both presented in the best possible way, and with all the right paperwork in place. We then actively market to a database of over 150,000 potential and interested bidders. We also give them an opportunity to inspect the machinery and when they place the winning bids can then help them arrange shipment and delivery to where it’s needed.”

Jonnie Keys concluded: “We’ve a busy auction schedule over the next couple of months with auctions taking place at almost all of our sites around the globe including the next sale in Dromore that will take place June 20-21 and is already building a strong inventory of new equipment to be sold.”

Euro Auctions today
Euro Auctions hosts over 60 key auctions each year, from 10 sales sites in seven countries on four continents around the globe plus hosts various off-site and administration auctions each year. Collectively over 100,000 lots or more are auctioned each year, consigned by more than 6,000 regular vendors. Each auction has massive appeal with sustained corporate marketing initiatives regularly reaching a global audience of over 150,000 potential buyers; one in five of whom actively register as bidders, with over 10,000 taking delivery of one or more consignments. This has resulted in a global annual turnover in excess of £400-million with market growth continuing to expand.


Also, auctions scheduled under the Yoder & Frey brand in the USA include:
• Florida, 23rd May
• Findley 6th June

All offer potential buyers a great opportunity to acquire impressive lots, so for specific details on all upcoming sales and to obtain relevant bidder catalogues visit Euro Auctions at www.euroauctions.com. Potential consignors should also contact info@euroauctions.com or call +44 (0) 2882 898262.