Evoquip introduce new models to their comprehensive portfolio of crushing and screening machines. 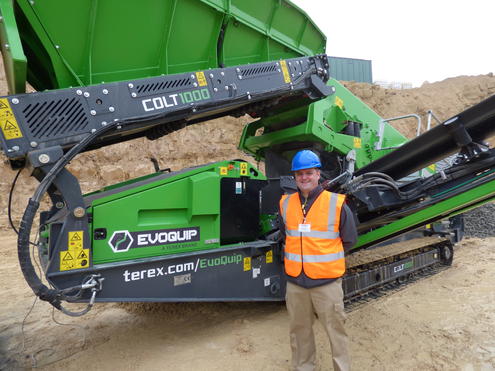 The HUB team were particularly interested in the two new machines and Matt Dickson – Business Line Director for EvoQuip took us through the specification of the Cobra 290. “The Cobra 290 is a versatile and easy to use compact impact crusher that can operate in the most demanding of applications such as reinforced concrete, recycled asphalt, C&D, coal and natural rock. It is the perfect solution for on-site recycling in urban areas and is easy to transport from site to site where it can be rapidly set up from ground level. This along with the intuitive two-button start up sequence ensures the customer can be crushing in minutes.”

Driven by a 315Hp Volvo engine to power the fuel efficient and high performing direct drive system that runs the impact crusher the Cobra 290 has the throughput potential of up to 290tph depending on feed material and apron settings.

Material is fed into a fully enclosed 3.3m³ hopper, which eliminates any potential for material spillage down into the engine bay beneath. Configuring the machine to suit differing applications is straightforward. Although the standard aperture on the pre- screen is a 40mm hexagonal punch plate it is simple to select an alternative size, a grizzly screen or a blanking plate all of which are fully interchangeable with one another.

Matt, continued, “On passing through the punch plate the fines material then flows down the by-pass chute the customer again has the ability to select whether they want to blend this material in with the crushed product or to divert out the side of the machine via the optional by-pass conveyor by rotating a flap gate.”

At the heart of the Cobra 290 is the Terex CR055 Impact Crusher. This impactor has been developed using proven components and technology from some of our larger impactors within the Terex range.

The Cobra 290 was certainly designed with the operator in mind in terms of ease of use and serviceability. With ground level access to the engine, hydraulics, service and refuelling points it ensures maintenance is easy for the operator. This is further enhanced with other features such as the hinged radiator pack, hinged diesel tank and product conveyor that can be removed quickly for major maintenance.

This is the latest addition to the EvoQuip scalping screen range and is the largest screen in their portfolio. Designed from the ground up using the years of expertise within the Terex design team who have created a machine that is large enough to deal with very high production sites but compact enough to meet the requirements of an ever-changing market.

Matt commented, “A very versatile and mobile machine with a very compact footprint the 400tph+ Colt 1000 maintains the ethos of EvoQuip. We offer an entire reconfiguration from the factory in two forms. The standard configuration discharges the fines product to the right-hand side of the plant with the mid-grade on the left. As an option, both conveyors may be ordered reversed from the factory. Further conversions are available once the Colt reaches the field where both conveyors can be placed on the same side of the unit however they need to return to its original configuration for transport.”

The feeder system has class leading capacity through the folding hopper extensions. The 1000mm wide conveyor complements the screen to ensure minimum spillage and maximum screen area is managed from the feed point.

With accelerations reaching up to 6g and speeds more than 1,000rpm, the Colt 1000 screen is a powerhouse of production managing the most difficult and sticky scalping applications.

The Colt 1000 also includes a variable screening angle to adjust screen performance to the application in hand which is another key feature of the design and sets itself above most of the competition in its class.

We also noted that one of the single biggest advantages is its fines product conveyor. By coupling a broad belt and proud discharge height, the product distinguishes itself amongst its competition. It stands alone in this regard and can deliver the largest volumes of fines to the biggest stockpiles, ensuring operators can focus on other duties than regularly clearing the fines product.

It was a great open day where the new machines performed efficiently, and it was plain to see user friendliness is at the heart of the brand, with new products development with a focus on simplicity, easy maintenance, fuel efficiency and ease of transport.