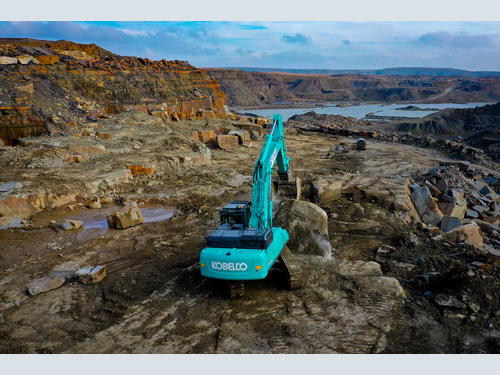 The latest addition to Yorkshire based Fairhurst Stone’s fleet sees a change in their brand of preference since our last visit, earlier in 2019, looking at the first Case CX750ME to arrive in the UK along with a CX500ME. Switching to the Japanese manufacturer Kobelco has been a big move by the Yorkshire based firm, but their new SK500LC-10 ME certainly catches the eye in the Yorkshire landscape thanks to its distinctive blue paintwork

Established in 1997 by Edward Fairhurst, the company has become one of the most highly respected suppliers of a wide range of Natural Stone Products, with a proven track record of supplying award winning Yorkstone paving projects throughout the UK. Their purpose made, large production facility at Settle operates with the latest saw technology producing the famous Whitworth sawn Yorkstone paving, Slab and Scant and sawn six-sided sections in a variety of other UK stones which they deliver across the whole of the country.

Famed for its durability and high technical performance, Whitworth stone has been used throughout the UK in major prestigious public realm schemes such as Kings Cross/St Pancras Stations in London, most involving many thousands of square metres in each project.

Whilst the block stone remains the main focus of theoperations, there is a large amount of waste material excavated to remove each block. The huge Whitworth Quarry, a few miles north of Rochdale currently provides a large amount of the product currently used by the company. The large quarrying operation at Whitworth produces and supplies bulk aggregates, washed sand, sand alongside the main block products. A large amount of the sand-based products is now also used for the manufacture of ready mixed concrete with the company operating a number of ready-mix trucks from their new batching plant at Langcliffe.

The arrival of the Kobelco marks a departure for the company in their purchasing decisions. The large fleet of Case machines is still the dominant force with the CX750ME having a visit to the ‘dentist’ during our visit. The arrival of the SK500LC-10 ME as a direct replacement for the 50t Case, came from a number of issues encountered with the newer CX machines which have entered service with the operator over the last 12 months.

“We have had a number of quality issues with the newer Case machines.” Explains Matt Knowles. Matt is currently in charge of the new Kobelco having come from the equivalent sized Case machine. “The issues haven’t been serious, but they have put doubts in the mind of our boss who spends an awful
lot of money on plant each year.”

At the time of our visit the new Kobelco was commencing the excavation works to expose another large bench of block stone.

Supplied by Molson Equipment from their depot at Warrington, the 52-tonne excavator has been specified with the ME boom and dipper option allowing it to use all of its 363hp and 1470Nm of torque available from the 10.62 litre Hino engine to prise the large lumps of stone from the face.

The Tier 4 compliant engine uses a simple AdBlue system to bring it in-line with this stage of the emissions regulations.

The ME version of the SK500 is available with either a mechanically variable undercarriage or in the case of the Fairhurst machine, a fixed 3350mm wide unit riding on 600mm wide track pads. The upper structure of the 52t Kobelco is big. Access to the engine compartment from the offside is a big climb up the track and over the bodywork but is made easier and safer thanks to the large handrails and the non-slip perforated top to the body. Cab access via a sturdy track-frame mounted steps and a series of grab handles including one on the large perforated walkway which adorns the near side of the body.

The walkway can be removed in a matter of minutes should the individual panels suffer damage or the width of the machine need reducing for transport.
The Kobelco cab has been protected by a sturdy FOPS guard and front screen manufactured by Rock Guard and has come in for praise from Matt who rates the finish of the cab very highly. “We’ve only had the machine a few weeks but I’m very impressed with the comfort in the cab. It’s well laid out and
well screwed together. I’m very happy with it. Even though I’ve got the grille on the front screen, the cab is still light and spacious. There’s plenty of light coming in from the rear window which isn’t obscured by the engine cover as on some excavators.” The camera system on the rear and offside of the machine display on the large colour screen which is situated above the multi-display unit which allows the operator to adjust machine functions from the integrated menu system.

The mass excavation set-up on the excavator comprises of a 6.3m boom and 2.4m dipper stick and whilst reducing the overall reach of the machine compared to a standard boom set up, it’s all about using the power available to remove the blocks. The ME set-up has been fitted with a Geith quick
coupler and JJ Bullen riddle bucket. “We don’t need a standard digging bucket.” Matt explains “We’re either digging out the rocky overburden or the blocks. A riddle bucket allows us to transport more of the material we need rather than a load of muck with it. This way the material going to the processing plants is cleaner and needs less screening.”

Putting the Kobelco to work, Matt sits on the edge of the bench where the next blocks of stone are to be removed from. The company uses the services of a hired in Volvo A40G ADT to haul the material excavated from the bench to the top of the quarry for processing. The operation at Whitworth isn’t a typical quarry project where production is king. Matt carefully loads the lumps of stone from the edge of the bench into the truck ensuring the larger pieces stay intact. Whilst the truck takes the trek up to the top of the quarry, Matt removes some of the loose material from around the next block to be removed.

Whilst the blocks can be split horizontally quite easily, the vertical break to form a large block, takes a lot of expertise and hard work from Matt and the Kobelco. In between loading the Volvo ADT, Matt works the corner tooth of the bucket into a small fissure in the rock eventually working the gap to a
sufficient size for it to split across the rest of the surface.

Working on a weight of 2.2t/m3 the first pieces removed weigh roughly 25 tonnes each. With these chunks moved out of the way, the Case 1021F loader equipped with a set of heavyduty forks comes in to move them up to the top of the quarry. The second block was to test man and machine a little more.
Unable to split the lump in two along the horizontal seam, the block was eventually prised out in one big lump with an estimated weight in excess of 40 tonnes. Despite the size and weight of the block, and the fact the triple grouser tracks were directly onto the smooth rock, the Kobelco managed to move
the block along the rock head with comparative ease.

Even though the Kobelco has only been on the fleet for a matter of months, the early indications and feedback from the team on-site is extremely positive.

Whether the arrival will herald a change in buying policy from the MD Edward Fairhurst, only time will tell. But the performance in removing just the few large blocks we witnessed whilst on site goes to show that Molson and Kobelco certainly have a product capable of challenging the more traditional mass excavator machines on the market.