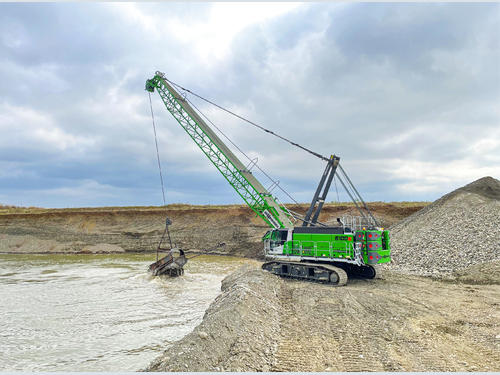 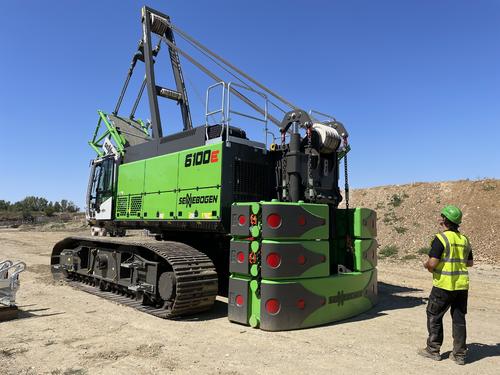 The Denjean Group is a family-owned company and a major player in southwestern France in the fields of transport, logistics and the production of aggregates such as gravel and sand. The Group is now increasing production output at its Saint-Elix-Le-Château site in the Haute-Garonne region, complementing the SENNEBOGEN 6140 HD acquired a few years ago with a second duty cycle crane with dragline from the manufacturer: the 100-ton SENNEBOGEN 6100 HD...

Three years ago, Denjean Granulats had opted for the SENNEBOGEN 6140HD with 140 t lifting capacity to secure the operation of its plant at the Saverdun pit in Ariège. Now, the French company has once again demonstrated its confidence in the SENNEBOGEN brand and has opted for another of the manufacturer's duty cycle cranes by purchasing the 6100 HD. SYGMAT, the exclusive SENNEBOGEN sales and service partner in France, delivered the 100 t machine a few weeks ago and immediately put it into operation. Equipped with a 3.4 m³ dragline bucket, the new duty cycle crane will from now on ensure gravel production for the Denjean Group in Saint-Elix-Le-Château.

With fully telescoped crawler undercarriage, the 6100 HD has an overall width of almost 5 meters, providing excellent stability. For transport, the width of the telescopic Starlifter undercarriage can be easily narrowed to less than 3.5 meters. The transport weight can also be reduced to under 41 t by additionally dismantling the crawler tracks. The innovative self-assembly system of the crawler crane allows the machine to assemble itself on site without the need for an additional auxiliary crane. This applies to both the crawler tracks and the counterweight, which the 6100 HD can pick up and set down by itself. The technical teams on site therefore assembled the 100 t crane and the dragline bucket from the French company IEV in a very short time. This was followed by a comprehensive safety-related commissioning.

With the two 275 kN free-fall winches of the powerful crane, the 3.4 m³ dragline bucket, which is equipped with additional rippers, can be operated optimally and the extraction work at the site can be permanently ensured. What's more, the new SENNEBOGEN 6100 HD duty cycle crane is dimensioned in such a way that production efficiency has even been increased. The fairlead ensures ideal and gentle rope guidance, guaranteeing long-term safe and coordinated control of the crane and the dragline bucket. Meanwhile, an environmentally friendly engine that complies with the latest Stage V European emissions regulations reduces on-site emissions.

Crane operator Jean-Pierre Cruzel and Daniel Piovesan, operations manager at Denjean Granulats, confirm after only a short time that the crawler crane will deliver the expected performance with flying colors: "The cycle times are in line with our targets and the machine can be controlled smoothly and precisely. Thanks to the free-fall winches, the drag bucket penetrates the soil well and the fill level is excellent."