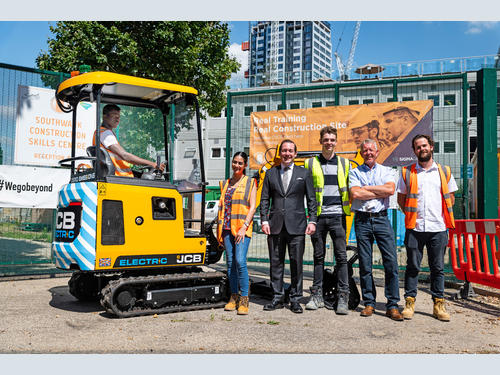 The company has provided a JCB 19C-1E mini excavator – the world’s first electric mini excavator to go into full production – to the Southwark Construction Skills Centre (SCSC),  based on the South London Elephant Park development. The link-up means the training school is the first to offer training on zero-emissions excavators.

Charles Stevenson, General Manager of JCB`s London office, said: “JCB is leading the way in clean technology and reducing harmful emissions, especially in urban, air quality sensitive environments such as utility works. We are delighted to be able to support the SCSC in offering the world`s first training course using zero emissions plant at a facility recognised for its excellence by the Mayor’s Construction Academy.”

John White, Operations Director of  SCSC said: “We are really pleased to be supporting the JCB innovation drive to deliver zero emissions machines.  The JCB 19C-1E is an innovative product delivering environmental improvements and it will be invaluable in training local people on the technology of the future. Developers Lendlease have committed to the Elephant Park project being net carbon negative, by 2025 and the Skills Centre has an important role to promote sustainability across the site and to the local community.”

Elephant Park has been selected as one of only 19 projects across the world to take part in the C40 Climate Positive Programme, which supports the creation and implementation of large-scale urban communities that reduce greenhouse gasses.

Founded in 2014 on the South London Elephant Park development site the SCSC offers courses to address the construction skills gap across South East London due to the high number of projects and developments. It is also an approved Construction Skills Certification Scheme certification centre.

Initially set up to engage with the local community, SCSC has trained 6,260 students in a range of disciplines from plastering and plumbing  to machine operating, delivering 418 apprenticeships resulting in employment on many notable projects such as HS2, Tideway and Wood Wharf.

With the drive towards lower emissions, the zero-emission JCB 19C-1E will allow contractors to work inside buildings and in emissions sensitive inner city environments. It will also allow rail contractors to operate in tunnels and underground, without having to install costly exhaust extraction equipment.

Another huge advantage of the new electric mini is that the external noise is a massive five times quieter than its traditional diesel powered counterpart. This means contractors can work after normal hours in urban streets without disturbing residents, as well operating in other noise sensitive environments including hospitals and schools.