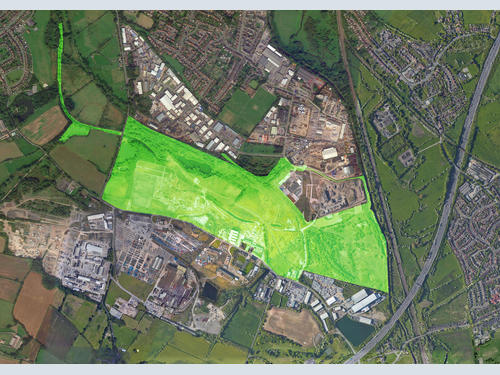 A joint venture between two prominent Derbyshire business families has completed a deal to secure the future of the former Stanton Ironworks in Ilkeston.

The 192 acre site at Lows Lane, Ilkeston, has been acquired by Verdant Regeneration Ltd from previous owners, Saint Gobain, in a deal brokered by JLL.

Verdant Regeneration is a joint venture and private endeavour between owners from established local firms Ward and Trust Utility Management, who already have existing facilities adjacent to the site.

The team has ambitious plans to transform the former steel works - one of the largest potential development sites in the East Midlands - into a thriving national distribution, logistics and rail freight hub for the Midlands, to be called New Stanton Park.

“As local businesses with a strong heritage in the area, we see this as a real chance to create a new legacy for Ilkeston. It will unlock potential for long term business opportunities and future jobs for Derbyshire and the wider region.”

Since 2007, the land has been subject to a number of failed attempts to secure a future for the site that was once a major employer in Ilkeston. Dating back to the 1800s, at its peak it employed over 7,000 people as part of the British Steel Corporation Tubes Division.

Expanding on the ambitions for the site, David Ward, added: “There are existing private rail links into the site which join into the national rail network. Toton Sidings and the proposed HS2 depot are less than a mile away. This provides a great opportunity for taking materials, goods and HGVs off the roads and onto the railway.

“There is a long journey ahead, but we are working with Erewash Borough Council and Derbyshire County Council, combined with a range of experienced consultants to develop the site. The ambition is to make the site sustainable by encouraging eco-friendly businesses and increasing biodiversity, for example ensuring the future of the Ilkeston Fishing Club, which is important to many local residents. We want to create something that we can all be proud of.”

With the sale now complete, preliminary work will start early 2021 and the team will look to include an outline planning application to Erewash Borough Council by early Summer 2021. Working in close partnership with Network Rail and GBR Rail Freight the first train bringing materials to the site is expected in mid January 2021.