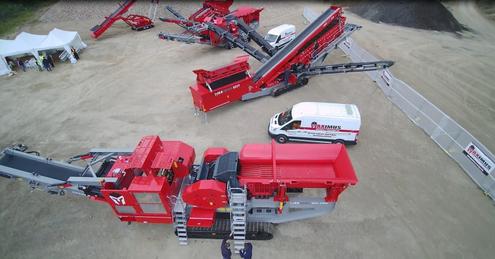 A specially selected audience were recently invited to the Maximus Crushing & Screening UK open day held in London. Over 70 people attended the open day and live demonstration at Camden Environmental’s 25acre site located in North East London. They all came to explore the Maximus range and get up close and personal with the new MXJ-1100G Jaw Crusher, the star of the show.

We spoke with Shane O’Neill, Managing Director of Maximus “We’re delighted to have the new Maximus MXJ-1100G Jaw Crusher here today as we believe that this machine is a game changer for the crushing and screening industry. It features a Cummins 6.7 engine connected to a specially designed gearbox that delivers direct drive to the crusher, and takes 97% power from the engine. A traditional hydrostatic system would only give around 74% power, meaning that we gain around 24% more power on this crusher.”

Shane added “This direct drive system allows us to drive the crusher in forward and reverse and features an anti-blocking system which is especially useful when you are crushing tarmac, as the operator can quickly ‘joggle’ the crusher to clear the jaw box of any blockage. This ‘joggling’ means that the jaw box can be moved forward and backwards instantly and very quickly to unblock it. This new MXJ-1100G Jaw Crusher also runs on around half the fuel compared to a standard hydraulic system, using around 18litres of fuel per hour, so this is a huge saving for the operator.”

Shane explained a little more about the new jaw box design “The jaw box features an automatic hydraulic release system which means that if any un-crushable material enters, it won’t damage the jaw box, as once a certain pressure is reached the hydraulic rams will open the jaw and ‘dump’ all the material out of the bottom. The system then resets itself to the correct Close Side Setting (CSS). The system also monitors the wear of the jaw plates, so when very abrasive material is used, the system is capable of resetting itself every 20hrs, meaning that the jaw plates will touch and then open back out to the correct CSS. On this model we also offer an optional pre-screen allowing customers to take out a rough sellable product.”

The new MXJ-1100G Jaw Crusher was one of seven machines on display at the open day, the others included the 522T Sizing Screen, MXC-1000 Cone Crusher, 409 Scalping Screen, 512 Scalping Screen, 516 Scalping Screen and T80-48 Conveyor. In a working area of the site there was also a live demo every hour for visitors to enjoy, which featured a MXJ-1100 Jaw Crusher working with a Maximus 516 heavy duty scalper. This effective combination was more than enough to handle the material that the Camden Environmental site had to offer.

409 & 512S Vibrating Scalper
The Maximus 409 & 512S have been developed for the smaller end user who require versatility and ease of transport, without compromising on build quality and reliability. Designed to cope with the heaviest applications, the Maximus 409 & 512S can be used in crushing circuits, demolition and construction waste management, aggregates, heavy rock and topsoil applications, as well as many others.

516 Vibrating Scalper
The Maximus 516 is a heavy duty, high capacity scalper capable of screening a wide variety of material in the harshest conditions. It is designed to cope with the heaviest applications and can be used in construction and demolition waste, primary crusher circuits, iron ore, aggregates, coal, recycling, heavy rock and topsoil.

MAX T80-48 Conveyor
The Maximus T-Series of Conveyors offer superior stockpiling capacity. The MAX T80-48 is the largest conveyor in our range and is designed for ease of mobility on site. It is manufactured with a highly robust chassis for optimal strength in difficult working conditions, such as those within a quarry plant, and has a very quick set-up time of 10 minutes.

MXC-1000 Cone Crusher
The high performance and unique Maximus MXCâ€1000 is designed for direct feed applications without the need for pre-screening on clean rock. At its core is the Maximus MXC-1000 cone which provides excellent reduction and product shape in large volumes.

Iain Herity, Sales Director for the UK was keen to say “We’ve been delighted with the quality of customers who attended our very first customer open day and the feedback has been phenomenal right across our Maximus line-up. I’d also like to thank Mick Marrinan from Camden Environmental for the use of his site here in London, it has been a perfect setting for a very successful event.” Iain Herity has also opened a new site, located at 1 Kitsmead Ln, Longcross, Lyne, Chertsey KT16 0EF for Maximus Southern.

Hubert Watson, Global Sales & Marketing Director had some more exciting news “As part of our global brand promotion we’ve now teamed up with the Discovery Channel and GOLD RUSH. The Hoffman crew will be using a Maximus TFC-80 Swivel conveyor in the new series 8 of the show. We wish them well in finding lots of gold!”

Maximus are delighted to have all of the UK market covered by the following: