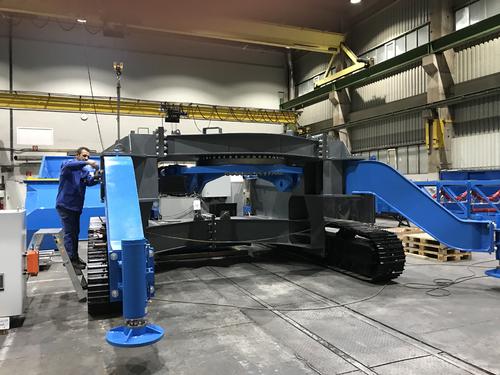 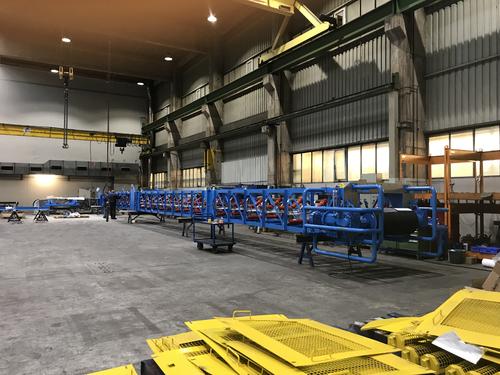 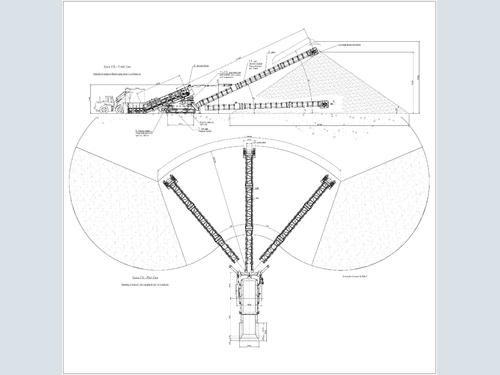 AUMUND Asia Ltd, located in Hong Kong China, is acting in the Asia Pacific Area and sells AUMUND, SCHADE and SAMSON equipment in all kinds of key industries such as Cement, Mining & Minerals, Chemical and Fertilizer Industry, Ports & Terminals and many others more. Synergies within the AUMUND Group of companies consistently lead to successful outcomes: In May 2020 AUMUND Hong Kong won an order from  PT Asahimas Chemical, Java/Indonesia, for the New Generation of STORMAJOR®. The project was technically supported by SAMSON Materials Handling Ltd/UK leading product company in the AUMUND Group for mobile bulk handling solutions. The pre-assembly of the STORMAJOR® takes place in the workshops of AUMUND Foerdertechnik GmbH, Rheinberg/Germany. The delivery is planned for December 2020...

The new designed STORMAJOR® is the combination of a Mobile SAMSON Material Feeder and an Outloading Boom, both mounted on the same chassis. The diverse options for stockpiling and loading offered by the STORMAJOR® were the compelling factor in the order from PT Asahimas Chemical, a company which operates several chemical production plants in Cilegon in Banten Province, Java, Indonesia. In 2018 it built its own power plant, where the first New Generation STORMAJOR® will operate, serving an important purpose in minimising spontaneous combustion of coal by stockpiling the coal externally and bringing it back inside once it has cooled down.

Challenge: Danger of smouldering coal fires caused by glowing nests
PT Asahimas Chemical is concerned about embedded hot bodies, which occur frequently causing the coal to catch fire in covered storage areas of the power plant. Currently the glowing nests are removed with diggers from the stockpiled coal and transferred to an external storage area about 50 m away by dump trucks, where the coal is left to cool down before being taken back into the covered storage areas using the same diggers and dump trucks.

PT Asahimas Chemical selected a 450 Series STORMAJOR®, which is the medium-sized model, for its operation in Indonesia. The bucket capacity for material discharge is approximately 4.5 t and a conveying length of 11.5 m.
The Outloading Boom is 27 m long, has a luffing range from 2 to 30 degrees and a slewing range of 80 degrees (40 degrees in each direction). This STORMAJOR® forms stockpiles of up to 11.75 m in height.