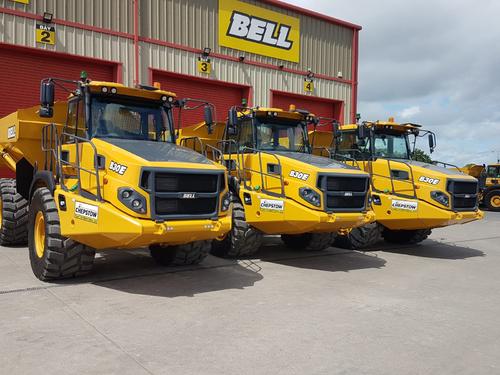 Ten B30Es and four B40Es join Chepstow’s hardworking task force and will be put through their paces, working for a variety of customers on critical payload management operations, where the Bell machines’ standard on-board weighing feature will be invaluable. Due to the payload being measured from three different points on the truck, this feature is proven to be accurate to five percent irrespective of the amount and distribution of the material being loaded.

This recent consignment is the latest order to come from a successful 17-year association between the two firms. During that time, the companies have formed a mutually beneficial relationship, built not only on sale and supply requirements, but on a programme of safety-based research and development.

Performing as a complete mineral, aggregates and earthmoving contractor, Chepstow Plant has become renowned for placing safety as its utmost priority. Consistently striving to create a safer environment as standard, the contractor has set the bar as an industry front-runner, providing clients with the safest machines on the market.

Chiming with Chepstow’s safety principles, Bell Equipment considers its machines’ integral safe tipping solutions as ‘non-negotiable’ essentials, regarding its included vehicle software as ‘being as fundamentally important as the engine itself’.

With Bell UK as a supplier and Chepstow Plant as safety research partner, the two firms have, in conjunction with the development teams at Bell South Africa, helped progress Bell Equipment’s ‘Safe-Tip’ software over recent years, by assessing the movement of their machines along with payloads and environmental working conditions.

The capabilities of ‘Safe-Tip’, in addition to the inclusion of Fleetm@tic® technology – Bell Equipment’s satellite-based fleet management system - and its multiple advantages, combine to create an ADT with the design, safety mechanisms and power to meet Chepstow Plant’s exacting requirements.

“It’s been beneficial for us to contribute towards critical research and development that heightens the tipping safety of plant machinery. Being part of the process has given us insight, as well as the confidence to return to Bell for this latest phase of machines,” says John Corcoran, Managing Director of Chepstow Plant.

“We consider Bell Equipment a great safety partner within the industry. The company has invested heavily in research to develop systems that prevent its ADTs from performing unsafe or overloaded tips, and the technology to make its machines real contenders in the increasingly digital, working quarry environment.

“The partnership has served us well, and we hope it continues for years to come.”