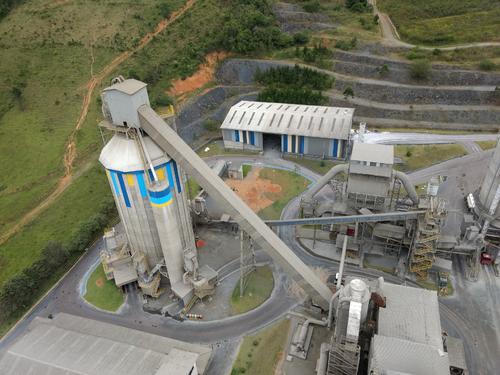 The conversion or replacement of existing AUMUND conveying equipment, as well as non-AUMUND equipment has been an integral part of the technological expertise of the AUMUND Group for more than 30 years. The largest Brazilian cement producer, Votorantim Cimentos, has repeatedly placed its trust in this specialised know-how, most recently awarding an order to AUMUND Ltda, São Paulo, for the replacement of a pan conveyor at its Xambioá plant in the state of Tocatins...

An AUMUND Bucket Apron Conveyor type BZB was chosen in this case to replace the pan conveyor used to transport clinker from the cooler to the silo. It has a centre distance of 92 m and a conveying capacity of up to 170 tph.

The most significant technological improvement presented by the AUMUND Bucket Apron Conveyor in this project is the reduction in dust. The BZB is the ideal solution for conveying on a steep incline, and the customised buckets, with a width of 510 mm, efficiently prevent wasteful spillage of dusty material into the environment.

Supply and commissioning of the new Bucket Apron Conveyor in Xambioá is to take place in October this year.

Votorantim Cimentos selected this AUMUND solution not least because of an already successful experience with a similar project in another of its works, at Vidal Ramos in the state of Santa Catarina. Over the years, AUMUND has supplied more than 300 machines to Votorantim for many different applications in its plants.