Rising Stars in the East Invest in LiuGong Excavators. 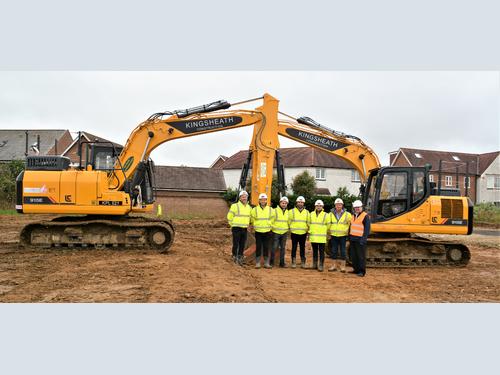 Kent based Kingsheath Construction are the latest business to invest in a fleet of LiuGong excavators which have been supplied by LiuGong Direct UK, who are the sole UK suppliers of LiuGong equipment...

Managing Director, Jamie Pike, who has a long history of working in the groundworks industry, formed the business in October 2018 along with Matt Jeffrey who is a shareholder. The fledgling business received their first tender on the 21st of the month and started the contract in January 2019. The work has continued to snowball from there.

The rapidly expanding business which now employs 100 employees, amassed an impressive £11m turnover in their first year of trading and currently have contracts secured worth in the region of £44m, which is a key factor in the investment in the new machines.

Most of their work is in the housebuilding groundworks and civil engineering sectors, primarily for blue chip housing developers including Bellway Homes, Abbey Developments, Countryside, Redrow Homes, Crest Nicholson and Persimmon Homes, to name a few.

Having had previous experience hiring in LiuGong’s 22-tonne 922E models, they discovered that all their operators liked them, so when the decision was taken to invest in a fleet of 15-tonners they held discussions with LiuGong Direct UK to look at their options.

LiuGong Direct UK’s Grant McGregor arranged for a demonstration model of the 915E to be delivered to site and both drivers agreed that it was one of the best machines they had operated. So according to Jamie it was a bit of a no brainer and they decided to purchase the first four of a ten machine deal which will see the others arriving over the coming months.

Kingsheath Construction currently run machines from Komatsu and Volvo in the 13/14-tonne range, which is the core size excavator for housing sites, but moving forward they will be looking to standardise the fleet to consist entirely of LiuGong machines, all of which will feature the company’s distinctive silver and black corporate livery.

Plant Manager Nick Earl explained the reasoning behind purchasing the LiuGong machines. “One of the key issues is the fuel consumption on the machines. We have found we are getting ¾ of a day more out of a tank of fuel on these compared to our other brands on the fleet.  In addition to this, the operators all love the cabs on them.  I have also had a great long term working relationship with Grant and I know that the back up from LiuGong Direct UK will be second to none”.

Summarising, Kingsheath Construction’s Managing Director, Jamie Pike, concluded  “Although we are a Kent based company, we are extremely ambitious to expand our working area into Essex and the Home Counties.  With these new machines we will be well prepared for the busy times which lay ahead for our business”.