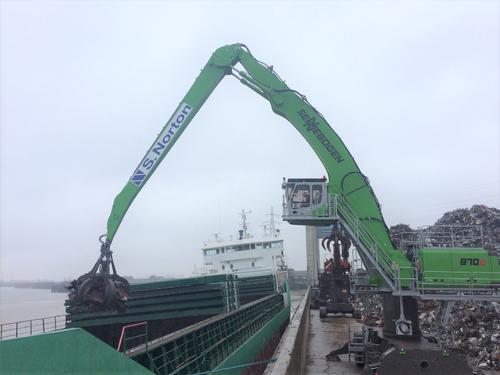 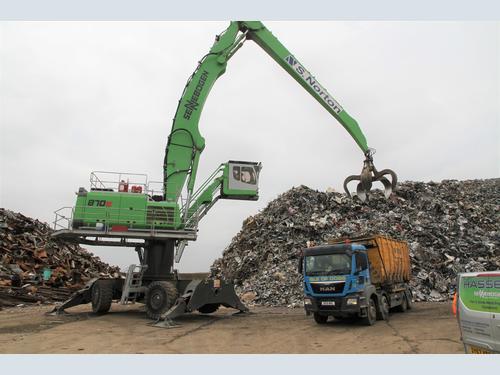 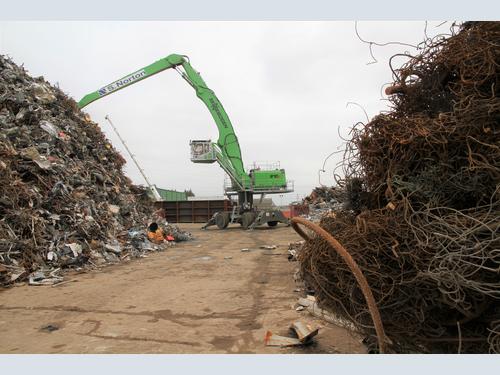 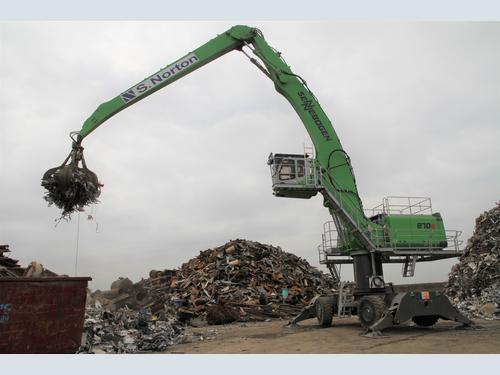 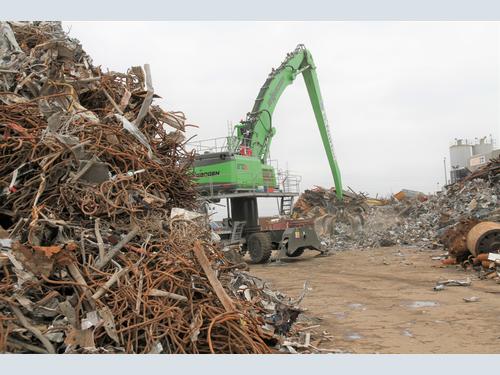 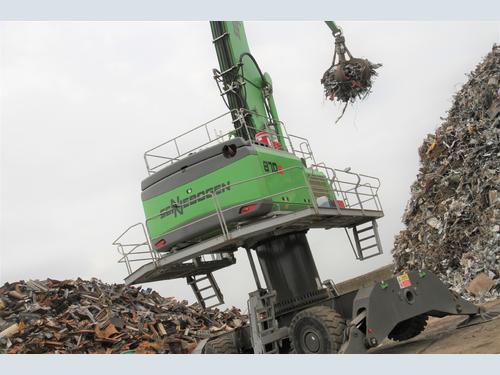 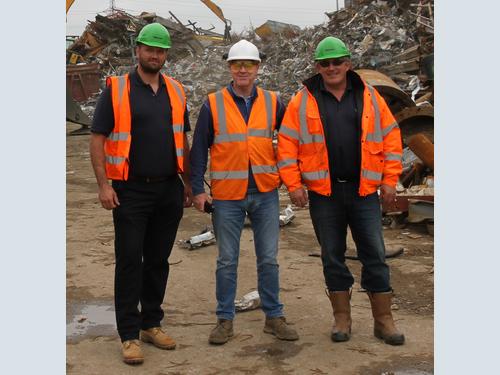 The HUB team recently visited the Barking site of S. Norton & Co Ltd to view their two new Sennebogen 870E Hybrid Material Handlers that have been supplied by the Sennebogen dealer – E.H.Hassell of Stoke-on-Trent.

With their HQ in Liverpool the family-run company operate a further three sites. These new acquisitions in material handling power at their Barking site are part of a £15 million investment programme in efficiency with similar investments planned across their Liverpool, Manchester and Southampton operations.

The four sites turn over approximately 1.5 million tonnes of recycled metal per annum across the world.

When the HUB team visited the Barking site the two new machines were hard at work handling the scrap recycled metal.

The changing face of the Barking site:
Michael Duke – Site Manager, takes up the story, “The company acquired the 6.5-acre site at Barking in 2013 from an existing exporter who at that time was processing approximately 70,000 tonnes/annum utilising a couple of Sennebogen 835 material handlers along with other plant and machinery. Six years on and the throughput has nearly doubled. The majority of the product produced at Barking is normally trans-shipped to our deep-sea terminal at Southampton where it is destined for export. It’s all loaded here from our wharf which is the reason why we have invested in the two machines.”

In 2017 the company invested in the two Sennebogen 870 machines which have literally transformed the site. Investing in new handling equipment has enabled the company to increase throughput and reduce ship loading time.

“The site currently operates with one processing shear and as the site has developed with the introduction of new plant, in particular the Sennebogen scrap handlers it has been possible to reduce handling and loading time. This has enabled the business to purchase more product increasing its turnover and throughput which has instigated the purchase of a second large shear to cope with the increased tonnages. The new shear will take the sites processing ability to around 600 tonnes/day and should be operational later this year.

Vessel loading:
The berth at Barking is tidal which means a high tide is a necessity to facilitate vessel loading which occurs every two weeks. Due to this it was essential that that loading time is kept to a minimum to cope with the increased tonnages the site is handling

Originally with the 835 machines it would take 15 hours to load a vessel working at 250tph. With the two new 870E material handlers loading in excess of 400tph it now takes eight hours!

A huge benefit to the site and the way it operates on a daily basis.

Brian Albiston – UK Sales Manager, commented, “These new machines have really ramped up the material handling at Barking. With their capabilities they can go higher and have a 24-metre reach which facilitates more accurate loading. All of this is done more efficiently with the ‘Max Industry’ cab which can propel the operator vertically by 9 metres allowing a completely new perspective of the loading.


“The 870E also comes with Sennebogen green hybrid energy recovery system a combination of hydraulic cylinder on the boom and nitrogen accumulators with gas recovery during the work procedure and can save 30% of the energy required. Previously the older machines were fitted out with 1.2 metre grabs and with the 870E machines specified with 3 metre grabs this equates to a massive difference picking up nearly 5 tonnes every time.”

Michael, added, “We processed 125,000 tonnes last year and with our new material handlers and a second shear I expect this to increase over time. We normally load four vessels a month at 3,500 tonnes a vessel which equates to approximately 12-14,000 tonnes by sea every month.

“Most of our recycled scrap is despatched to our deep-sea export site at Southampton where it is discharged awaiting further shipment to the end user in various destinations.”

At the Southampton site there is another Sennebogen 870 employed and with further investment another two 835M machines have been ordered alongside another two for the group.

Daily business:
Barking is a busy site and as Michael acknowledged essential housekeeping and health and safety are the order of the day. With a constant flow of materials passing over the weighbridge, documented and then tipped in a specified area next to the shears. Here 250-400 tonnes per day is processed from various lengths of any dimension which is then processed into smaller handleable pieces and then stockpiled by the Sennebogen material handlers for the next ship.

With over 100 separate transactions per day its virtually non-stop and the big Sennebogen 870E material handlers take it all in their stride.

Confidence in your tools:
Michael summarised, “When we took over the site, we looked at what we had, and we looked at other machines in the marketplace. But when I looked at the original machines, the hours they had done, the ease of service and the tonnage they had handled, and the back-up from Hassell that had been provided there was no doubt in my mind that we had to look seriously at Sennebogen when we made more investment.

“When we did make the decision, it was obvious that when you looked at what you got for your money then Sennebogen was a clear winner.”

Michael continued, “ When we inherited the original 835 machines’, they were 10-12 years old and had in excess of 15,000 hours on the clock and to this day are still giving us great service.

“We have a service package with the new 870Es and even prior to the investment in the two Sennebogen 870E Hybrids the original machines were being serviced by Hassells. There has always been first-class back-up from them, and it just made sense to continue with new machines backed by them.”

The Sennebogen 870E Hybrid Material Handler:
Each weighing in at 105,000kg and powered by Cummins 12 (stage V) direct injection, turbo charged engines the two Sennebogen 870E Hybrid Material Handlers fitted with 3 litre orange-peel grabs are the product of decades of experience offering the most advanced computer simulation, the greatest degree of stability and longest service life. Mounted on a MP80 wheeled undercarriage the 870 has a compact boom of 13.5 metres and a grab stick of 12.3 metres. Large scale mounting points are incorporated alongside precision-crafted sealed low-maintenance special bushings, quick change couplings for connecting/removing/turning grabs and a whole host of options makes the 870E Hybrid a world beater.

Two very impressive machines keeping the Barking operation in safe hands for the future of a growing business.