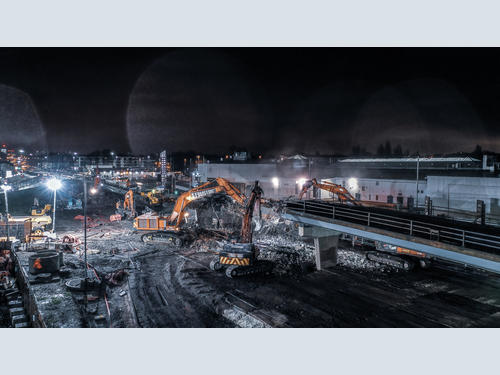 The dismantling of the Perry Barr flyover in north Birmingham has successfully been completed by Tarmac, marking a major milestone in Phase 2 of the A34 Perry Barr highways improvement scheme.

With well over a year in the planning, the 50-year-old structure was safely removed in just a single weekend (February 5-8) to make way for an improved road layout that will incorporate a new dual carriageway, cycle paths and improved public transport services. The highways scheme forms part of a £500m+ regeneration project to transform Perry Barr and surrounding areas.

Working alongside specialist subcontractor S Evans & Sons Demolition, principal contractor, Tarmac employed seven excavators to remove the flyover – four of which were among the largest machines of their type currently being used on the UK road network.

The excavators were fitted with ‘cruncher’ attachments to crush and remove the concrete superstructure, and ‘shear’ attachments to cut through the steel supports. Over 300 lorry loads of materials were removed from the site, with all of the waste steel and concrete set to be recycled. The Tarmac team was able to help further minimise disruption for the public by removing the flyover abutments as well as the spans in one go.

Andy Brown, director of Tarmac’s Infrastructure business, said: “The dismantling of the A34 flyover is a critical milestone in the long-term regeneration of Perry Barr. To have successfully and safely completed this phase of works ahead of schedule and under a tight programme is a testament to the dedication, skill, and expertise of our team. We are extremely proud of the work undertaken and were able to open the road an hour and a half ahead of schedule.”

Birmingham City Council’s Cabinet Member for Transport and Environment, Councillor Waseem Zaffar said: “It’s a great credit to all involved that such a complex operation was carried out safely, speedily and with minimum disruption. We are now able to turn our attention to completing the new road layout, which will provide better access to public transport and improved facilities for walking and cycling in Perry Barr.”

With strict timings and only one weekend allocated for the work, careful coordination of traffic management was critical to the successful completion of the job. Transport for West Midlands (TfWM), working closely with Tarmac and the City Council, led in the organisation and communication of statutory diversion routes.

Phase 2 of the A34 Perry Barr highways improvement scheme is set to complete in May, with Tarmac now turning its attention to lifting pre-cast sections of a new bridge onto the redesigned Birchfield Junction nearby within the next few weeks.

The wider programme of Perry Barr highway improvement works is set to be completed at the end of this year and will see local roads remodelled and redesigned to make the area more accessible by sustainable forms of transport including a new Sprint bus priority corridor.

The highway scheme will support the delivery of new homes, improvements to public transport, walking and cycling routes, new community facilities and lively public spaces in Perry Barr, to make it one of the most well-connected areas in the West Midlands.