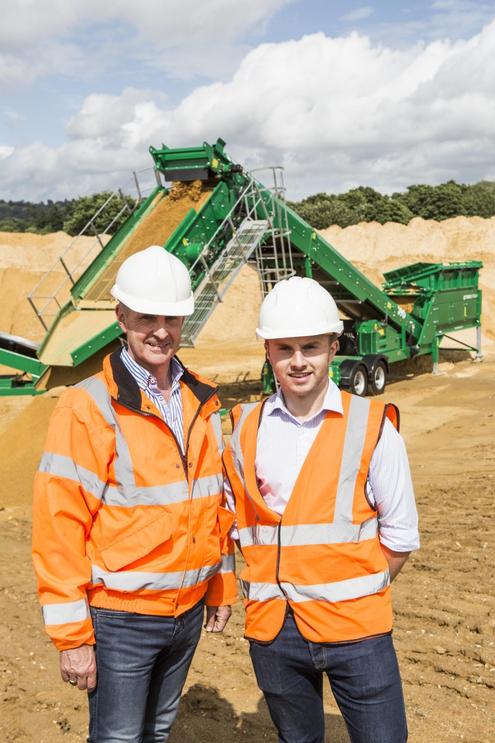 A family-owned quarry, which is setting the blue print for a modern, sustainable site, has turned to Finlay Plant SE to introduce powerful screening technology to the business.

J & J Franks has specified a new Terex Finlay 390 Hydrascreen and Terex Finlay TC 6532 Stacker for its new, purpose-built sand pit in the heart of Surrey, strategically located within the M23 and M25 corridor.

The development is being hailed as a model quarrying site, with careful consideration given to all aspects of the operation to ensure maximum productivity is achieved in harmony with the rural location.

Features include extensive asphalt surfacing to reduce the noise from sheeted lorries going to and from the site, as well as the creation of a water-based wildlife refuge using the lagoon and lake onsite. 27,500 trees have also been planted around the perimeter.

Peter Crate said: “This project has been a blank canvas, which has allowed us the time and space to really consider every aspect carefully.

“We are fortunate to own substantial reserves in an unparalleled location, which can serve much of London and the surrounding area.

“It has taken decades to achieve planning to convert this into the single biggest consented site in Surrey, and in that time we’ve been able to scrutinise every aspect.”

The Terex Finlay plant was introduced to the site by Leon Sheehy, the MD of Finlay Plant SE.

It is fitted with hydraulic variable angle adjustment on the screenbox and a high capacity belt feed Hopper, while the 6532 forms part of the Terex Finlay TC range of conveyors, which are constructed to the same highly engineered specification.

The screening plant and stacker have been finished in J & J Franks green livery, to reflect the company’s brand and to also blend in with the surrounding environment.

Already, in pre-production trials, the Terex Finlay 390 is handling up to 210 tonnes per hour.

Peter added: “Finlay Plant SE came to us with the 390 option and we felt this machine best fitted our needs.

“It’s a very simple yet effective system and we like the fact the screening box is at an acute angle.

“It produces an amazing volume of product and we are very pleased with the outcome.

“Leon has been exceptional and totally committed to making sure the Terex Finlay plant in place operates to the optimum performance.”