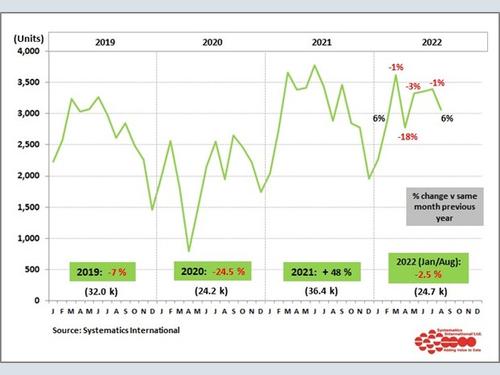 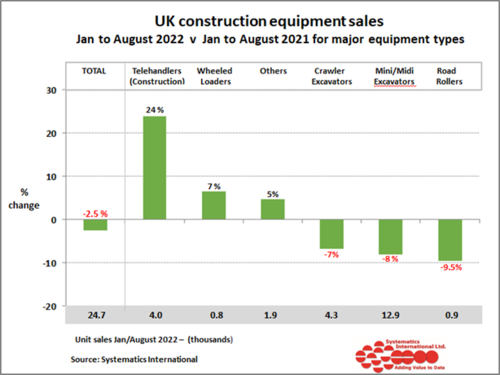 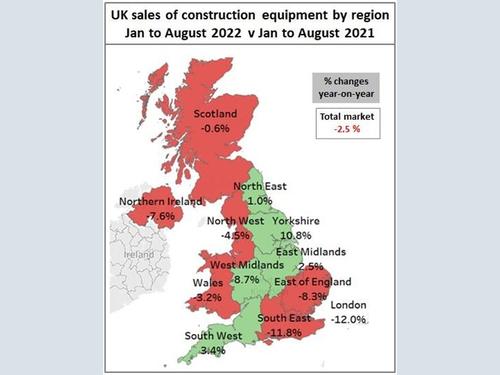 Sales of construction and earthmoving equipment in August were 6% above sales in the same month last year. This was the strongest performance since February when sales were ahead of last year's levels by a similar amount. Following this, sales in the first eight months of the year are catching up with last year's levels, and are only 2.5% behind 2021 after reaching 24,700 units. Members are still highlighting that a range of supply chain issues are impacting sales of equipment and this suggests that without these problems, sales this year would probably be ahead of the “record” levels seen in 2021.

The pattern of sales for the major equipment types in the first eight months of the year to August is shown in the chart below compared with the same period last year. This shows percentage changes in sales year on year, ranked from the highest to the lowest, and continues to show a mixed pattern for the different machine types. Telehandlers (for the construction industry), continue to show the strongest growth by a significant margin this year, at 24% up on 2021 levels. Sales of Road Rollers remain the weakest, at 9.5% down on last year’s levels. Sales of Mini/Midi excavators and Crawler excavators, which are the most popular equipment types, are between 7% and 8% below last year’s levels in the first eight months of the year. A significant contribution to this is believed to be supply chain constraints associated with the supply of machines from some Asian countries, particularly Japan.

The pattern of sales on a regional basis in the UK and N Ireland is shown in the map below for sales from January to August, compared with the same period in 2021. This also shows a mixed pattern. The strongest sales so far this year continue to be in Yorkshire, at nearly 11% up on last year’s levels. In contrast, London and the South East of England region have seen the weakest sales at close to 12% down on last year’s levels

* The construction equipment statistics exchange is run by Systematics International Ltd. This scheme is run in partnership with the Construction Equipment Association (CEA), the UK trade association.