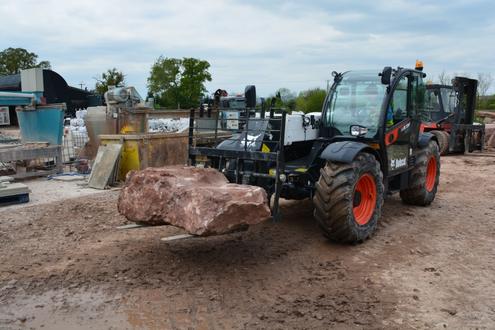 The UK’s first new Bobcat TL38.70HF Agri telehandler is acting out an unusual double role, working both in a quarry processing plant and on a farm at the foot of the Black Mountains in the county of Herefordshire in England. The new telehandler is owned by Black Mountain Quarries Ltd, based at Howton Court in Pontrilas in Herefordshire, and was supplied by Kellands (Plant Sales) Ltd, an Authorised Dealer for the Bobcat and Doosan ranges.

Black Mountain Quarries Ltd is a family-owned business with four working quarries providing the widest selection of walling stone in the UK, from block stone for building and walling; flagstones for internal flooring and external paving to split stone for traditional and modern roofing tiles.

The business was founded by owner, Adrian Phillips, in 2005 on the family farm in Tybubach in Herefordshire. Here the stone the company quarries – technically a red Devonian sandstone – is characterised by its green-grey colouring combined with russet brown tones. It was the first product from the company and is sold as BMQ Random Building stone. Having been used historically in the region, it was initially very popular for local projects. The quality and colouring of the stone quickly led to national demand and the business expanded from there.

In 2006, the company opened Llandraw Quarry a mile along the valley. The Llandraw stone is identical in colouring and quality to that at Tybubach, but its natural laminations gave the business the opportunity to cut flagstones and traditional stone roofing. In 2007, Adrian Phillips took on Callow Hill Quarry in Monmouthshire, which allowed the business to offer a different type and colour of building stone and blockstone. Finally, in 2011 when the De Lank Quarry came up for sale in Cornwall, Black Mountain Quarries jumped at the chance to include its beautiful Cornish granite in its portfolio.

Higher Power and Performance
Adrian Phillips commented: “Though we bought it through our Cornwall quarry, the new Bobcat TL38.70HF AGRI telehandler is now working at the central processing plant at Howton Court for the stone from the quarries in Herefordshire and Monmouthshire. It has taken over from a Bobcat TL360 telehandler, which we have been very pleased with. We have switched the two machines so the TL360 is now working in the Cornwall quarry, where it continues to do good work.

“I bought the new Bobcat TL38.70HF telehandler to provide more lifting capacity and a greater lifting height. At the processing plant, it carries out a range of material handling duties from loading stone into conveyors and lifting pallets to unloading the trucks that come in with stone from the three quarries.

“The new telehandler also meets our requirement for having a relatively small footprint, being able to work and move within the confined spaces at the processing plant. As well as the extra boom extension, I have also been impressed by the same high build quality we saw on the TL360 and the power and the speed of response coming from the new Bobcat D34 engine.”

The D34 97 kW (130 HP)/500 Nm engine in the TL38.70HF AGRI model utilises DOC and SCR with DEF injection after-treatment technologies, for tough applications requiring more power. The compactness of the D34 engine and a new styled low profile engine hood have also enhanced visibility on the engine side of the TL38.70HF AGRI.

The HF/High Flow Technology in the TL38.70HF AGRI offers outstanding hydraulic capabilities and performance with a class-leading 190 l/min load sensing pump (150 l/min at the auxiliary line) and flow sharing distributor.

This allows the operator to work at significantly lower speeds, consume less fuel and benefit from remarkably shorter working cycles. To prevent unnecessary oil heating and power loss, the load sensing pump supplies oil only when hydraulic power is required. If required, the full oil volume is available immediately, thanks to the Quick start system.

Adrian Phillips added: “The new Bobcat TL38.70HF AGRI telehandler is fully road certified and set up for towing trailers along the farm roads. After a full day in the stone processing plant, I tend to bring the new telehandler back to the farm, where it is an excellent tool for farm work.”

Backed by a three-year warranty as standard, the TL38.70HF AGRI is described as a Productivity and High Flow model and is part of a new range of telescopic loaders launched by Bobcat for agriculture, that complements another new range of 11 rigid frame telehandlers with lifting capacities up to 4100 kg and lifting heights up to 17466 mm, aimed at the construction and rental industries.

Replacing the previous TL470HF model, there is an improved load chart in the TL38.70HF AGRI, providing a 300kg increase from 3.5 to 3.8 tonne in the maximum rated lifting capacity. The maximum lift height on the 24 inch tyres is 6975 mm and the maximum horizontal reach is 3915 mm.

Like all of the new generation models, the TL38.70HF AGRI offers several new features providing higher comfort and productivity, including Power Lift, an efficient lifting technology that optimises the use of hydraulic flows between telescopic boom cylinders to increase the lifting capacity; an automatic parking brake for enhanced safety and operator convenience and Boom Cushion Retract, that automatically slows down the boom speed when the boom is nearly fully retracted or at min/max angles, increasing safety and operator confidence.

Another standard feature is the ECO mode, which maintains optimum hydraulic performance without using the engine’s full power, adjusting the main machine features to produce a balance between top performance and providing the best performance/fuel consumption ratio.