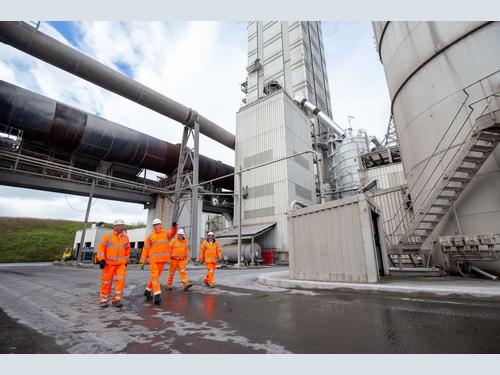 If the industry leading project goes ahead, it would be only the second facility of its kind in the world and would set the UK’s construction industry on a path to achieving the Government’s binding 2050 net zero targets.

The plant would supply net zero cement to projects such as new offshore wind farms, nuclear power stations, and clean transport infrastructure by capturing and storing 800,000 tonnes of CO2 emissions in expired gas fields in the Irish Sea through a carbon capture and storage (CCS) pipeline – part of the HyNet North West and North Wales programme.

Cement is a key component of concrete and an essential construction material with no viable alternative but is carbon intensive to make. As a result, the only way to produce the cement the UK needs without emitting large amounts of carbon, is to capture and store emissions.

If built, the project would begin supplying net zero cement from 2027. This would protect 222 jobs, create 54 new full time and 350 jobs during construction.

Hanson’s investment will also help pave the way for a sustainable future for the 2,500 people employed in the cement industry, the 15,000 indirect jobs and 2.5m jobs in the construction industry.

“It was fantastic to see how Hanson Cement aims to reach its own carbon-neutral targets with world-leading technology here in Flintshire while continuing to create and support jobs.”

Simon Willis, CEO Hanson UK said: “We were delighted to welcome David TC Davies MP to showcase our plans for Padeswood, which would significantly reduce carbon emissions in our business while also securing the long-term future of hundreds of highly-skilled jobs”.