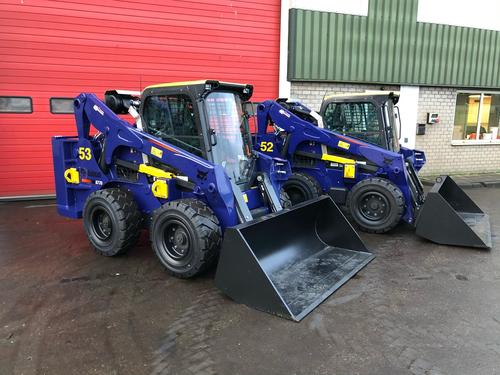 The two new S770 Bobcat skid-steer loaders for the ZHD fleet. These are ‘port edition’ machines after modifications made by Inter-Techno, the Dutch importer for Bobcat. 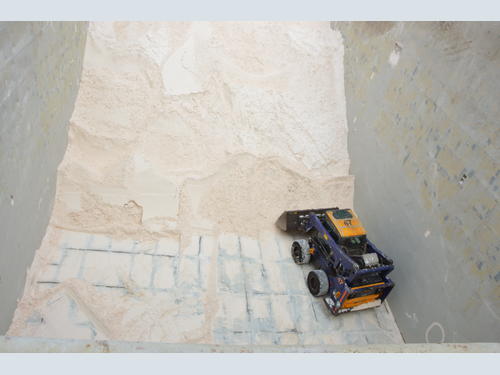 Currently there are 16 machines in use at ZHD, unloading various materials from the ships where other methods such as conveyor belts or suction systems are impossible to use. 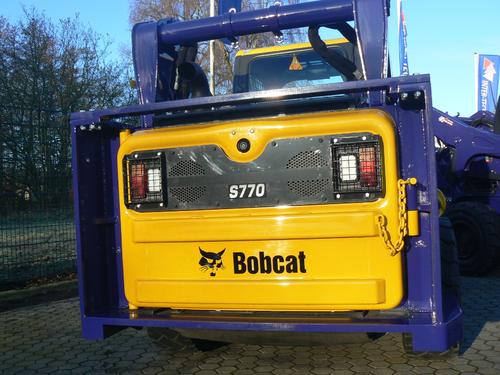 A heavy steel bumper is welded to the rear, protecting the engine and the cover against collisions with the walls of the hold. To give the driver an even better view, a rear-view camera is mounted on the rear hood.

For almost 51 years, stevedoring company, ZHD Stevedores, based in Dordrecht in the Netherlands, has been using Bobcat skid-steer loaders to clear the holds of ships and to move material around so that the grabs on the large unloading cranes on the dockside are kept busy. This way of working was introduced to be able to unload or load a ship as quickly as possible so that it can sail again, as idle time costs money in shipping. Any part of the load that remains out of reach of the grabs on the cranes is collected and removed by the Bobcat loaders using hydraulic sweeper attachments.

The Bobcat skid-steer loaders for this work including the new S770 models that ZHD Stevedores has just purchased, have to undergo many modifications before they are delivered to the company. This work is carried out by Inter-Techno, the Dutch importer for the Bobcat range for more than 40 years and Inter-Techno describes this as creating a ‘port edition’ of the skid-steer loader, after special modifications are implemented in the company’s workshop in Apeldoorn in the Netherlands. This special edition machine was developed jointly with ZHD Stevedores.

ZHD Stevedores is a family business that provides stevedoring services for a large number of clients in Dordrecht and at three locations on the Moerdijk industrial park. A number of important customers are located on the ZHD site, where they carry out production processes with materials that enter via the port. ZHD takes care of the storage and transfer of the materials for them. This can vary from steel rolls and scrap to bulk materials such as coal, iron ore, slag sand, pebbles, gravel, sand, sugar, salt and basically anything that can be loaded and unloaded with a grab.

To meet this demand, ZHD Stevedores has more than 100 grapples at its disposal. Over the years, ZHD has invested heavily in flexible mobile and floating cranes with a high capacity to optimally serve its customers in Moerdijk, Dordrecht and Rotterdam. The showpiece machines include a self-built 50-tonne self-propelled floating crane (gripper company, general cargo 100T), a 170-tonne hydraulic tyre crane and another two self-propelled 25-tonne floating cranes (40T general cargo) in Antwerp, Belgium. The floating cranes are used to load big sea-going vessels including the largest Capesize ships or to transfer their cargo to inland vessels and coasters.

Operators Request Bobcat Machines
The method of discharging ships using skid-steer loaders has been around since the 1960s. It proved to be the most flexible solution. The circumstances and the materials involved make it impossible to use other methods such as conveyor belts or suction systems. Initially, Bobcat skid-steer loaders were almost always used for this work at ZHD, with the exception of the period between 2000 and 2009.

In 2009, the first Bobcat machine to be purchased was given the number 28. Currently, there are 16 machines in use; with numbers from 36 up to 51. At the end of January 2020, two new Bobcat S770 skid-steer loaders - given the numbers 52 and 53 - were delivered to ZHD Stevedores to replace the machines with the numbers 36 and 37. ZHD has kept one of the two older models and the other one has been sold at an auction.

Modification and Maintenance
Before they can be used for unloading work, the Bobcat skid-steer loaders undergo a number of important modifications, which are mainly dictated by the environments in which the machines must operate. All modifications are made at Inter-Techno in Apeldoorn, after which the machines are delivered ready for use in the corporate colours of ZHD Stevedores.

Regular maintenance and repairs are carried out by ZHD Stevedores itself. Whilst a dedicated engineer is responsible for the maintenance work within the material management department, ZHD has also added extra Protection Plus warranty for the machines, which offers an extended warranty period of three years to provide extra security in case the company’s engineers are faced with a problem they cannot handle. In this way, ZHD has ensured that the loaders are up and running again quickly with little or no downtime.

Protective ‘Fresh Air’ Cab
“The modifications on the machines include the treatment of plugs and cable harnesses with a special moisture-resistant coating. The moist and dusty environment is not good for the electronics on board," Jan Elferink explained. “The adjustments to the cabs are also important. Drivers used to work in an open cab with a cage construction, but the requirements for working conditions and safety have become increasingly strict. To protect the driver against dust, overpressure cabs have been used for around 12 years to keep the dust out. The air that is blown into the cab goes through a P1 and P3 filter that captures very fine particles. P3 filters remove particles up to 50 x WNG (Legal Dutch Limit Value) so drivers no longer need to wear air masks."

The standard cab on Bobcat skid-steer loaders is both ROPS (Roll-Over Protection Structure) and FOPS (Falling Object Protective Structure) certified, but to protect the driver even more, instead of the glass in the door of the machines, this is replaced by Bobcat-Lexan, a very strong plastic material that is very difficult to break or damage. In order to give the driver even better all-round visibility, a special ZHD rear-view camera is mounted on the rear hood.

Tough Design Made Even Tougher
A number of modifications have also been made on the outside of the Bobcat loaders. First of all, the machines are sprayed in the house colours of ZHD, blue and yellow. Four additional tie down points have been added, two on either side of the upper structure, to which hoisting straps can be attached. This allows the Bobcat to be lifted in and out of ship holds. To make them more robust, the Bobcat loaders are weighted at the front and steel plates are welded to the lifting arms to protect the hydraulic cylinders. A heavy steel bumper is welded to the rear, protecting the engine and the cover against collisions with the walls of the hold. All modifications together ensure an extra weight of around 600 kg, which gives the loader even better stability and more load capacity.

The engines have to comply with special requirements because the Bobcat loaders work in almost completely enclosed spaces. Because of the stricter requirements with regard to working conditions and emissions legislation, the older models have been equipped with soot filters or Adblue is mixed with the diesel. Jan Elferink added: "The new generation of Bobcat skid-steer loaders has Stage V engines, but in the long run, electric Bobcat machines might be a very good alternative."