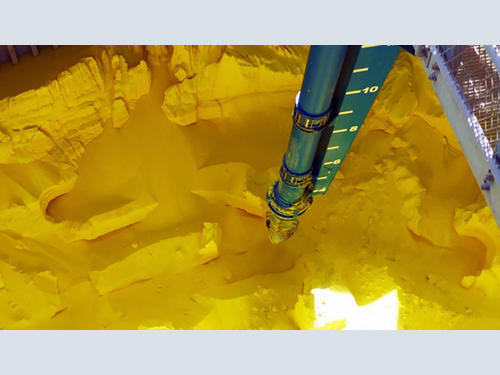 Bruks Siwertell has signed a contract with Ashdod Port Company Ltd for the delivery of a Siwertell ST 490-M screw-type ship unloader destined to serve Israel’s largest sea port. A fundamental requirement of the port was environmental protection; the totally-enclosed Siwertell unloader was the only system that could meet the standard and also offer safe, high-capacity through-ship performance.

Ashdod is Israel’s largest sea port in terms of cargo volumes and is a major gateway for the State of Israel. The new Siwertell ship unloader has been ordered as part of the port’s major expansion plans. It will be rail-mounted and used to discharge sulfur and pet coke at continuous rated capacities of 600t/h and 500t/h respectively from vessels up to 60 000 dwt.

Although a valuable and widely used commodity, sulfur is highly toxic, volatile and corrosive. For these reasons, it is now environmentally unacceptable for it to be spilled during unloading. However, its containment increases the likelihood of ‘hot spots’ creating the potential to explode and cause fires.

“We know how to deal with these dangers,” notes Mr Andersson. “Our sulfur-handling ship unloaders have been supplied to the market for over 30 years. All these units are fitted with the Siwertell Sulfur Safety System (4S), which detects and extinguishes fires early, shutting down the system to stop their spread, and safely containing them before they can become a full-blown blaze. To contain explosions, steel casings are reinforced and explosion-venting valves are fitted along the conveyors to relieve pressure.”

Ashdod’s bulk terminal operates 24 hours a day and the new ship unloader is destined to serve this facility. It will be built and transported fully-assembled via heavy-lift vessel for installation at the port. Delivery is scheduled for April 2021.