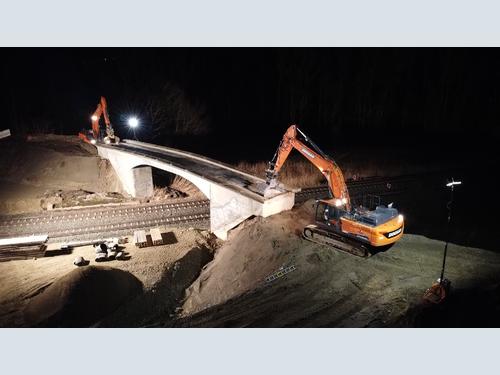 Three Doosan excavators - three days - a new bridge. Beller GmbH & Co. KG had exactly 72 hours to demolish and replace a dilapidated road bridge that ran over a busy railway line. Equipped with Doosan DX255LC-5, DX340LC-5 and DX380LC-5 excavators, the company was able to win this race against time, with the Doosan trio undertaking work with power, reliability and perseverance. Beller had bought the excavators from the Doosan dealer, Ummenhofer, based in Pfullendorf, over the last two years and was therefore well equipped for this mammoth job.

Keeping to the Schedule Step by Step
The task was clear: the old bridge had had its day after more than 100 years. The ravages of time gnawed at the foundations. The strong vibrations caused by the rail traffic had led to instability, so the bridge could no longer be used by heavy vehicles. A future-proof solution could only be created by demolition and new construction.

The schedule was tight and trains on the heavily trafficked railway line could only be stopped for exactly 72 hours. Over this time, it was necessary to create protection for the rail track bedding, tear down the bridge and restore the tracks to their original condition. Beller had to be particularly careful about a main data line that connects a large part of the region to the Internet and runs through the construction site area.

Demolition around the Clock
At exactly midnight, rail operations were stopped and approval was given to start work. From then on, things went very quickly. Around the clock, the operation was carried out in shifts. The three Doosan excavators showed their full potential. After the railway line was covered, a gravel bed was created by the excavators to protect it and the demolition was started. Particular attention was also paid to protecting the overhead lines.

With the help of several pulverizers, chisels and grabs, the DX340LC-5 and DX255LC-5 tackled the old foundations and the DX380LC-5 the superstructure. The actual demolition was completed in a short time. The approximately 800 tonne of concrete was removed and reused in Beller’s own reprocessing plants.

The spaces left by the foundations being demolished were filled in and compacted. This was extremely important as the foundations go down to a depth of two metres below the rail tracks and without this work, the stability of the rails would have been put in question when driving over them with heavy rail vehicles. The route was opened to traffic again on time after 72 hours. The Doosan excavators also took care of the subsequent earthworks and the loading of the trucks.

Reliability Pays Off
The three Doosan excavators were the main machines on site and it was down to them to keep the work on schedule. Commenting, B. Eng. Adrian Beller, the Project Manager said: “We can rely on our Doosan excavators. And although we had a service vehicle with a mechanic on site for safety all the time, it didn't intervene at all. The excavators performed well throughout. Just like our employees, who also worked very hard and I am very proud of them all.”

Beller and Ummenhofer, Two Strong Partners
Beller GmbH & Co. KG - Kieswerk Tief- und Straßenbau has been a sand and gravel producer at the Herbertingen location for more than 80 years. The company, founded in 1937, now employs around 70 people. In addition to the gravel works, the main focus is on demolition, civil engineering and road construction. For this, the company can rely on a large fleet of machines, which includes the three Doosan excavators used in this project and a Doosan DX140LC-5. Beller purchased the Doosan excavators from the Doosan dealer, Ummenhofer from Pfullendorf, and the two companies have a long-standing partnership.

Company owner, Adrian Beller, said: “With Ummenhofer we have a competent partner by our side that we can always rely on. The fast service and the great know-how of their employees guarantee the best cooperation."

Ummenhofer Baumaschinen GmbH, founded in 2006, is managed by Managing Directors, Peter Ummenhofer, his son, Daniel Ummenhofer and daughter, Petra Ummenhofer. Today the company employs 21 people, four of whom work in sales and 12 in servicing. Since 1st January 2020, the company has been looking after its customers not only from its headquarters in Pfullendorf, but also from a new branch in Schönau. In addition to the sale, rental and service of construction machinery, Ummenhofer also offers its customers a wide range of workshop services relating to the repair, maintenance and care of commercial vehicles and construction machinery